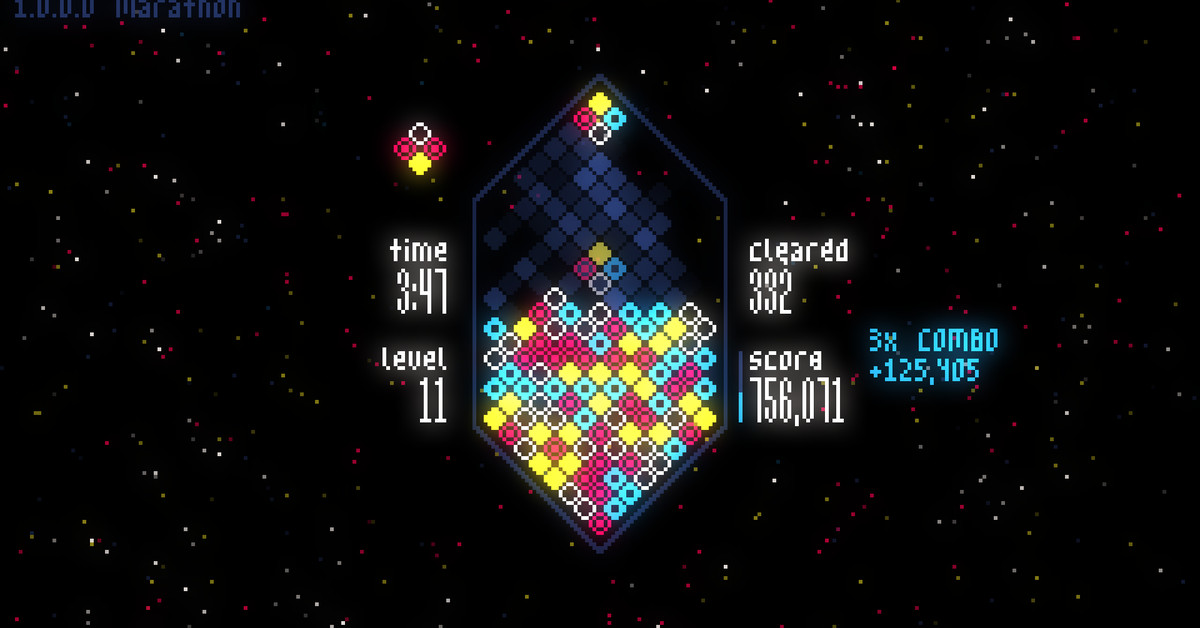 “I don’t know what this is but I already have an idea.”

That’s how game developer @davemakes started a Twitter thread last January, sharing a GIF of colorful tiles floating in a diagonal game space. Follow Dave’s theme, though, and you’ll see how they evolved this single idea over the months into a complete puzzle and rhythm game called Mixolumia, available for purchase on Itch.io last weekend.

The game itself looks extremely fun, combines a simple and bold art style with immersive music and sound effects, and the gameplay seems to be a cross between Tetris and Puyo-Puyo. What̵

7;s really compelling about this series, though, is the way it provides a glimpse into the often ambiguous world of game development, following Dave’s work and experiments.

Follow the thread and you can see how Dave adds new features over time, experimenting with certain mechanisms. An early question is, how will the tiles move when they touch another point? Should they split it in half? Should they slide down alternate directions? Or should they zig-zag down the screen to avoid this problem entirely?

One big question mark is: what happens when you hit a corner? It probably shouldn’t choose a random direction to flow. Should it all be on one side? How should it break? Hmmmm … pic.twitter.com/BqflrpEOQw

As you can see, Dave finally solved the problem by letting the blocks move in the direction they were last pushed. As they noted, that makes it easier for players to navigate tiles, adding depth and strategy to gameplay.

Blocks no longer break in corners. They fall in the last direction you pushed. Make everything more predictable, the better for strategy! pic.twitter.com/3GXfriocM1

We’re not going to summarize the full topic here, but click on that first tweet and you can see as Dave adds particle effects, a preview of where each block will land, the scoring system and levels, different game modes, etc. It’s fascinating to see the title take shape, and it feels like watching an artist’s time lapse of freshness.

What starts off as a game in simple main shades becomes colorful as new palettes are added:

Then the game’s musical elements evolve. Dave started with their own dynamic music effects but collaborated with musician Josie Brechner to create a more complex sound frame. I particularly love the example piece below, titled “Summer Shower”, which has the sound of rain intensifying as you play through a level.

During the game’s development, Dave brought the title to the Tokyo Indies (a monthly meeting for game developers), started a Patreon to support development and could eventually launch the title. This game is a full game, complete with customizable palettes and music effects. You can buy Mixolumia now for Mac and PC for $ 9 (10% off regular price).

It’s amazing what happens when you have an idea in mind and simply … follow.