Vuelta a España: Primoz Roglic took time in the 17th leg but maintained its overall lead against Madrid 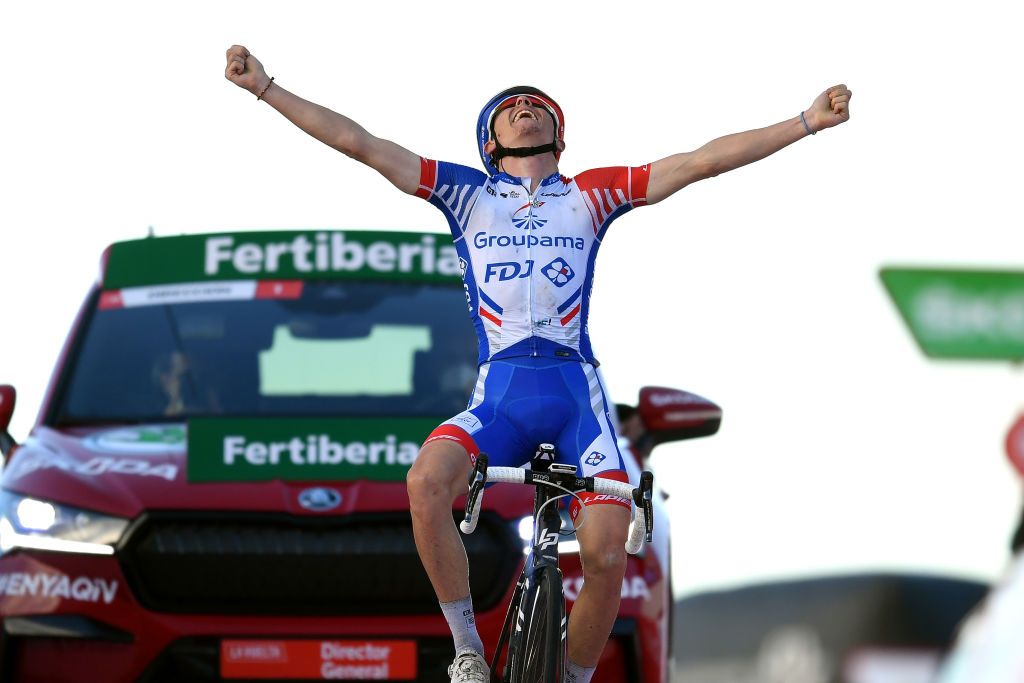 Primož Roglič (Jumbo-Visma) gets ready to win the red shirt after overcoming fear in the penultimate 17th leg of Vuelta a España.

The Slovenian tennis player was heavily pressured by Richard Carapaz (Ineos Grenadiers), who tried to pull away from him with an attack at the last leg of the climb.

A fierce chase between the two ensues as Roglic tries desperately to save Vuelta a Espana and Carapaz tries to take it over. The gap between the two at a time was more than 25 seconds, suggesting a 45-second advantage over Roglic’s GC over Carapaz was critically endangered, but Roglic eventually managed to dig deep enough to limit the losses. down to 21 seconds.

That means he maintained a 24-second lead in tomorrow’s final match in Madrid, all but the final victory.

Farther down the road, David Gaudu (Groupama-FDJ) proved himself the strongest on the day off to win on stage, after outperforming everyone, with Gino Mader (NTT) in second and Ion Izagirre (Astana) came in third. .

However, the real action took place behind in the peloton, when the GC riders swapped in a final fight for the red shirt.

Hugh Carthy (EF Pro Cycling) was the first person to pressure Roglic against La Covatilla, forcing the Slovenian to chase Sepp Kuss unable to close the gap on his own. With only Roglic, Carapaz, Enric Mas (Movistar) and Alexander Vlasov (Astana) left, Carthy made two more attacks, but it was Carapaz who took the decisive blow, causing him to be broken midway.

Roglic was briefly supported by his teammate Jumbo-Visma, Lennard Hofstede, who returned after the breakaway, and later Marc Soler, who also returned to support his teammates. His Movistar, Enric Mas.

But when Carthy launched another attack from the group, this time managing to chase down Carapaz, Roglic fended off on his own.

Desperate not to lose to Vuelta the same way he lost to the Tour de France earlier this season, Roglic blows himself blankly, trying to release Mas and Soler to let him cross the line by himself. It was just enough to save the army of red shirts.

How does it happen

In the final leg before finishing in Madrid on Sunday, things still go on to top the overall rankings, with Hugh Carthy 53 seconds behind Primoz Roglic, and Richard Carapaz even closer to 45 seconds.

There are six graded hikes in total, but GC candidates all have to keep their dough dry until frightening completion when climbing La Covatilla, due to other relatively easy hikes.

As the penultimate opportunity to win the race, many non-GC riders eagerly set out, and a large group of more than thirty had formed earlier in the day.

De la Cruz is the highest ranked GC racer to make it into the group, coming 10th in total at 9:29 and he senses an opportunity to rise further. His teammates accompanying him during the break set many paces and helped open up a 3-30 lead over peloton.

While not an immediate threat, Jumbo-Visma cares enough to keep everything in front of the peloton. A big turning point for Robert Gesink, which began at the second climb of the day, Alto de San Miguel de Valero, kept a steady distance between 3-15, despite doing his best to keep the speed high.

About 60 kilometers away, Movistar was in control of the bullet, which briefly caused a split in the plane with Carapaz and Dan Martin being caught up. Peloton quickly regrouped, but the increasing speed gradually reduced the advantage of the break, until it dropped to two and a half minutes at the start of the penultimate climb of the day, Alto de la Garganta.

When the gap dropped to 1-30 in the halfway up there, Movistar chased Marc Soler off the road in an attack. After joining with Erviti, who dropped back from the break, he joined the rest of the break on the way down, which has now dropped to around 20 riders.

Returning to the main course, Jumbo-Visma took on the pacing task from Movistar, and as a result the tempo slowed, meaning there was still a lot to win in the game.

In a short, unscheduled hike 18 kilometers from the destination, Donavan, Izagirre and Mader sprang up for the remainder of the break. They coordinated well and reached La Covatilla with a lead of 40 seconds during the rest of the break and almost four minutes behind peloton.

Izagirre did some acceleration when the rock gradient went up, and managed to take down both Mader and Donavan on the second try. He looks good for a stage win at the moment, but beyond that, David Gaudu has other ideas. The French player dropped the rest of the breakaway and captured Donavan, Mader and Izagirre one by one, and solo the final 4.3 km of the climb to victory.