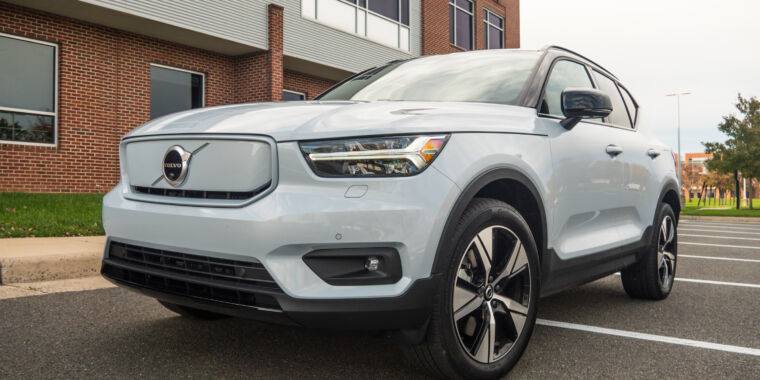 After years of waiting, a new series of battery-powered electric vehicles are about to go on sale in the US. Ford is preparing to launch the Mustang Mach-E. Volkswagen is working on ID.4. And last month in Ghent, Belgium, Volvo began producing the XC40 Recharge. It’s an all-electric version of the company’s popular XC40 crossover, a version that shares the drivetrain technology and Android Automotive operating system with Polestar 2.

Delivery time in the US is still a few weeks away, so proper first drive where we spend a day with a new car like we did with Polestar 2 this summer, would have to Wait a little longer. But earlier this week, I had a chance to spend some time looking at a pre-production example that Volvo gave to those of us who work as jurors for the World Car Awards. The streets of Manassas, Virginia, are my playground, and there’s no one interested in PR, just asking to bring it back in after an hour. Here’s what I learned.

From the outside, the XC40 Recharge looks a lot like any other Volvo XC40 – the easiest gift you’re considering on an all-electric version is that the front is emptied better for the system. Some of one’s bumpers rather than the open grille. From the driver’s seat, there are a few more clues. The 12.3-inch main tool screen has a different theme from the other Volvos, including an attractive new full-screen map mode. On the center stack, the infotainment screen has increased from 9 inches to 11.2 inches and although the square-based user interface looks quite similar to the Volvos running Sensus, it currently runs Android Automotive. Google’s voice recognition means it understands most of the questions you ask, and the navigation app provided by Google Maps is smart enough to know your charging status to be able to guide you through charging if need on the road.

There’s also no start button – like a Tesla Model 3 or a Volkswagen ID.4, just put it in an R or D position and drive away. Any doubts about the XC40 Recharge’s powertrain are immediately dispelled the moment you do so. Each shaft is driven by an identical 150kW (201hp), 330Nm (243lb-ft) permanent magnet AC motor unit and the battery pack can supply enough water for both units to power the unit. 300kW (402hp) total vehicle at One Time.

In fact, that’s the 660Nm (486lb-ft) of torque you actually notice, in large part due to it coming in immediately. In fact, this feels like the fastest Volvo I’ve driven, even though it’s a few hundred pounds heavier than similarly powerful plug-in hybrids from Sweden like the S60 T8 Polestar Engineered or the XC60 T8. . For bench racers, it will hit 0 to 60mph in 4.7 seconds, a few tenths slower than the closely related Polestar 2 but a second and a half faster than the petrol-powered XC40.

You can blame the battery pack for the XC40 Recharge’s 4,824lbs (2,188kg) curb weight – about 1,000lbs more than the internal combustion version. It’s a 78kWh package, 75kWh of which is usable, built in the house using LG Chem pocket cells. The official EPA approximate estimate has yet to be revealed, and for now Volvo is just saying it will be “200 miles”; According to the European WLTP test mode it has been recorded in between 249-260 miles (400-418km). But given the pre-production nature of our test car and limited time, I didn’t feel comfortable choosing the XC40 Recharge’s range efficiency.

However, I feel more comfortable describing the driving experience. There is no different drive mode, only the choice of forward (D) or reverse (R). Enabling or disabling driving mode with a pedal requires a few menu levels down in the car’s settings – if I have my car sick, I’d be able to do it the same way you can increase the brakes regenerate in the plug-in hybrid Volvos by going from D to B with the transmission selector.

Though the curb weight is a bit chunky, it drives well, and the suspension reduces the potholes I found. The low center of gravity also minimizes body roll through corners, although the upright riding posture reminds you that while the XC40 Recharge is fast, it’s not designed for run time. But for everyday life, it would be excellent. After all, we have to lose all we love about the petrol-powered XC40, then add to the level of acceleration of the 1990s supercar while simultaneously calming one’s conscience about climate change. $ 53,990 (before the $ 7,500 IRS tax credit) isn’t cheap, but I think it’s really worth it for this combination of Swedish style, crossover utility, and this electrical performance.