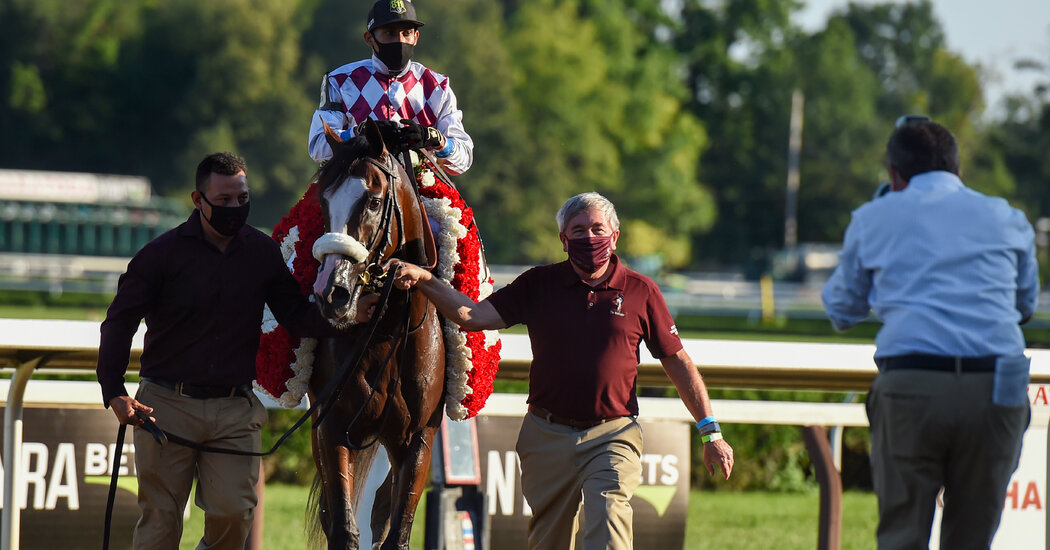 SARATOGA SPRINGS, NY – Belmont Stakes champion Tiz the Law added Travers Stakes to his winning résumé on Saturday, making him the winner of a Derby Kentucky game postponed next month and could then win the sport’s 14th Triple Crown with a Preakness win in October.

Tiz the Law, driven by Manny Franco, crossed the one and a half mile in two minutes 95 percent of a second, paying his supporters $ 3 for a $ 2 bet. It was his sixth win of seven starts for Tiz the Law, and $ 535,000 for the first place pushed his career income to $ 2 million.

“The Champions Graveyard,” as Saratoga is called, really feels like a cemetery on Saturday when the spectators are banned from the pitch. Instead, people congregate in temporary banquet plots near the track or watch the Travers from the veranda of nearby bars.

Tiz the Law’s triumph and his jockey are particularly famous at the Horseshoe Bar across the street from the club’s turn and with grooms, hot hikers and other members of the force Invisible labor of purebred racing.

The pony coach, Barclay Tagg, 82, handed a lifelong horse to Franco, 25, who gave Tiz the Law an inexperienced ride last fall at the Kentucky Jockey Club Stakes. Franco was stuck inside and couldn’t get out in time, on Tuesday.

Jack Knowlton, the managing partner of Sackatoga Stable, which owns Tiz the Law, said: “The Kentucky playboys are like Manny who learned at that school.

The more seasoned riders want to ride on Tiz the Law, but Tagg and Sackatoga’s partners stay with Franco, who have returned their trust by working harder in his profession.

“They make me a better racer,” said Franco.

Travers’ victory validated Sackatoga Stable’s ambitious schedule for Tiz the Law, one that reflects the journeys of some of the sport’s greatest horses.

The coronavirus pandemic, which changed seasons for many sports, completely changed the purebred racing schedule. Instead of a Derby Kentucky that played out as Triple Crown’s first leg on the first Saturday of May, Belmont Stakes took the lead for the first time in history, on a Saturday in June.

Tiz the Law’s victory in Travers was especially sweet for Knowlton. In 2003, he oversaw a hybrid football team in New York, Funny Cide, who made the Sackatoga partnership famous by winning the Kentucky Derby and Preakness.

Knowlton, who lives in Saratoga Springs, and many of his partners were heartbroken that year when Funny Cide fell ill and scratched the day before Travers.

Saturday’s victory was just a little bit of latest consolation. After winning against Belmont, Knowlton and his 34 current partners sold Tiz the Law’s horse custody in an eight-figure deal with Coolmore America’s Ashford Stud. Knowlton won’t reveal the exact price, but he admits that Sackatoga will receive a bonus if Tiz the Law wins the Travers, Derby, Preakness and Breeders’ Cup Classic, scheduled for November.

Now Sackatoga, Tagg and Franco are going to Kentucky with the best 3-year-old foal in the country.

“It was very interesting,” Knowlton said. “When I watched this show, it blew me away.”