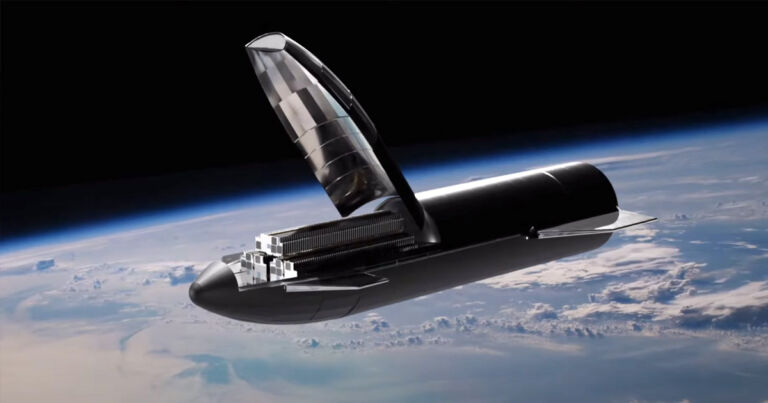 A group of SpaceX enthusiasts have created a stunning video of what the space company’s Starship launch will one day look like.

And it locked on a rare seal of approval: SpaceX CEO Elon Musk himself.

“Very close to the actual scheduled flight!” Musk tweeted to respond to the simulation.

Animation, uploaded to Twitter by Erc X, a SpaceX enthusiast, shows the giant spaceship taking off, powered by a Super Heavy booster and launching what appears to be hundreds of Starlink satellites into the fund path, before returning to the surface.

The animation also gives us a glimpse of what an important upcoming test flight might look like. The company is planning to launch its SN8 prototype to an expected height of 1

2 miles using three Raptor engines (out of six for the final design).

The prototype successfully completed a static fire test, but it is still unclear when its first big jump will take place.

The test flight, which can also be seen in the video, will include a “belly-bend” in which the spacecraft will use its underside to slow its return to Earth.

SpaceX still has a long way to go until Starship is ready for official timing, which is iterating over and over to make it a reality. SpaceX has begun assembling prototypes for the Super Heavy boosters that will put the Starship in orbit.

Once Starship is fully operational, SpaceX will be able to send significantly larger payloads into Earth orbit. Currently, the payload of the Falcon 9 missile is limited to 60 Starlink satellites.

In the conrast, Starship’s cave warehouse can hold up to 400, according to a 2019 year CNBC Interview with SpaceX President and COO Gwynne Shotwell.