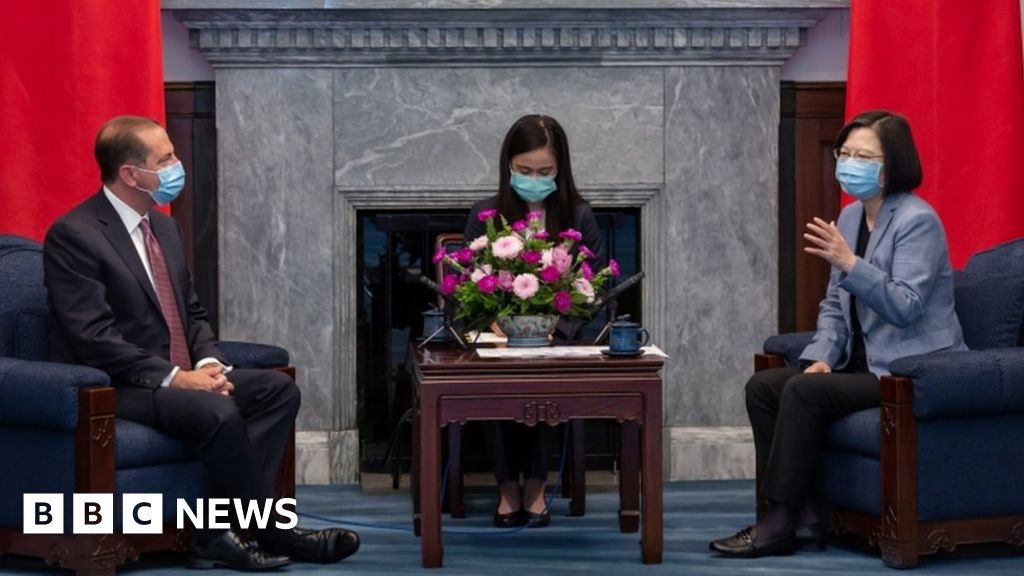 A US cabinet member met with the Taiwanese president on Monday ̵

1; a move that angered China and increased tensions between Washington and Beijing.

Secretary of Health and Human Services Alex Azar is the highest-ranking US politician who has held meetings on the island for decades.

For all purposes and purposes, Taiwan is an independent country, but China sees it as a breakaway province.

China calls on America to respect what it calls the “one China” principle.

“China is firmly against any official interaction between the US and Taiwan,” a State Department spokesman said when the visit was announced last week.

“We urge the US … not to send any false signals to ‘independent Taiwan’ elements to avoid causing serious harm to Sino-US relations.”

Mr. Azar, who visited the island the day before meeting President Tsai Ing-wen, said there were “three overarching themes” for the visit.

“The first is to recognize Taiwan as a democratic and open society, making the Covid-19 response very successful and transparent,” he said.

“The second is to reaffirm that Taiwan is a long-standing partner and friend of the United States.

“Third, it should be noted that Taiwan deserves recognition as a global health leader with an outstanding record of contributing to the international health”.

Although the United States has no formal diplomatic relations with Taiwan, the Taiwan Relations Act of 1979 allowed the US to sell weapons to the island and pledged it to have “close ties”.

Taiwan has confirmed fewer than 480 cases of Covid-19 and only 7 deaths.

It canceled flights from Wuhan on January 23 – before most other countries – imposed quarantine on other arrivals, and was able to track and track infections.

Taiwan is not a member of the World Health Organization, as it is not recognized by either China or the United Nations.

On December 31, the Taiwan government asked WHO for more information about the virus, but said it had not received an answer.

That was captured by President Trump in April, in a tweet critical of WHO.

The WHO said the Taiwan email “did not mention person-to-person transmission”.