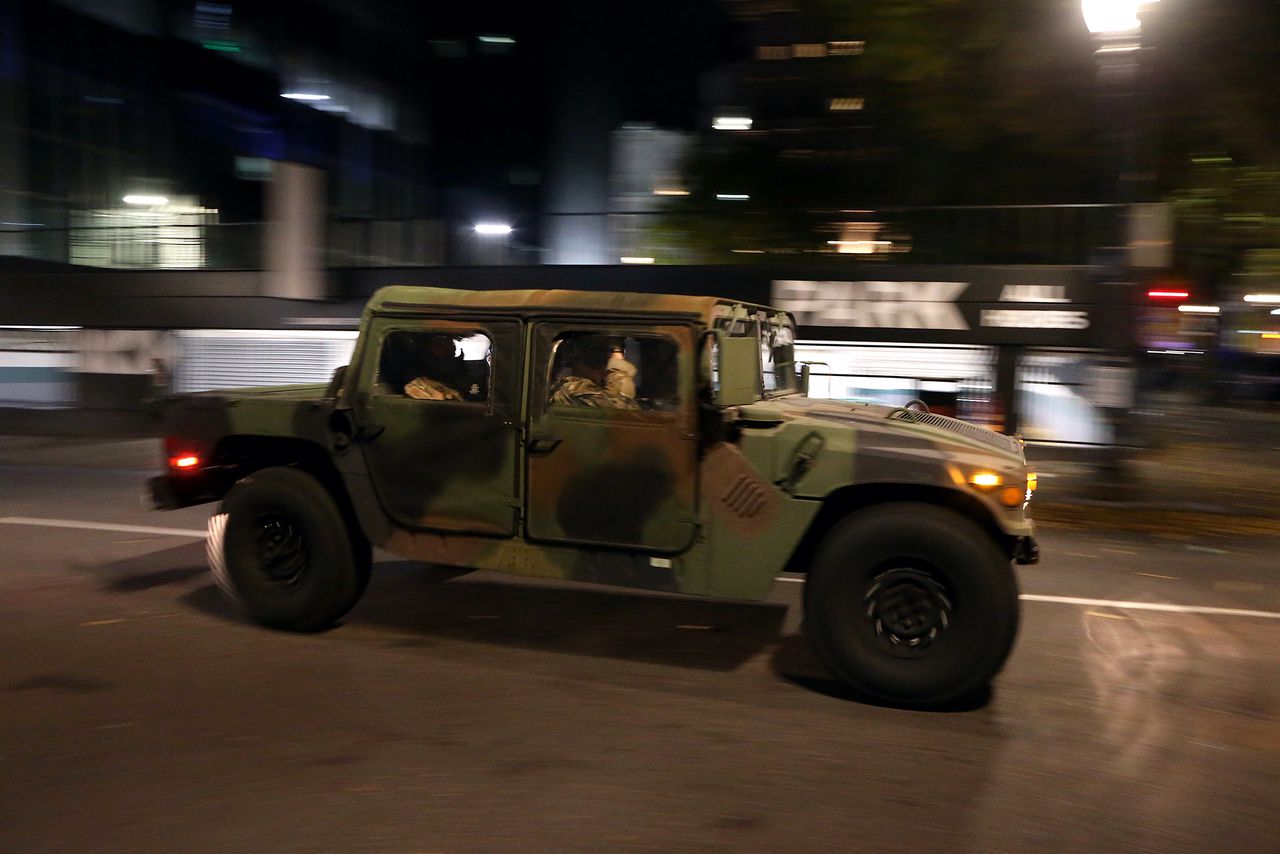 Governor Kate Brown activated the Oregon National Guard to help police protest in Portland early on Wednesday after some protesters smashed windows of businesses in the city center. official said.

The damage of a small group of protesters also prompted a joint law enforcement order commissioned by Brown declaring a rallying riot. Dozens of state soldiers responded and ordered everyone to leave. Officers said police had arrested at least 10 people, including one allegedly throwing a Molotov cocktail at police. Police said they also sizes rifles, ammunition, knives, hammers and fireworks of some of the detainees.

However, when police and protesters clashed in a downtown area, a peaceful protest for racial justice took place a few blocks away. The mass protests drew several hundred people as the country waited for the results of the presidential election.

President Donald Trump has routinely criticized the Portland protests, which have been going on most nights since the Minneapolis police killed George Floyd in late May. Trump has sent federal officers regularly to respond with force or tear gas clouds.

Portland Mayor Ted Wheeler was a vocal critic of the federal response. But many protesters also criticized Wheeler for not taking prompt action to reform the city police̵

Wheeler won a second term on Tuesday. The presidential race is still too close to call.

“Oregon National Guard members are civilian community members who help protect us,” said a statement issued by Brown’s Joint Command. “We do not take this decision lightly.”

The statement says the Oregon National Guard will help “keep the community safe” and that members are trained in crowd control. They will wear military uniforms and work alongside police, the statement said.

The governor’s decision came hours after she renewed her order to give control of political protests to a joint law enforcement order led by the Oregon State Police and Multnomah County Sheriff’s Office. . The authorities have issued a statement warning people not to engage in criminal activity, otherwise there is a risk of being torn apart.

The protests began at two separate points, one in Northwest Portland and one in Southeast Portland. Both events begin as rallies and develop into sundown marches.

The Northwest Portland Meeting, held in downtown North Park Blocks, was seen for the first time in a week of post-election action. About 200 people started the parade from the park around 5:20 pm

At the same time, a group of similar size marched west across the Morrison Bridge toward the waterfront of the city center. Everyone brought signs that said “Count all the votes.”

By 5:45 pm, both marches reached Southwest Naito Parkway. The two groups converged below the Burnside bridge.

The leaders of separate groups call on the marchers to unite and set aside philosophical differences in how to protest, namely whether to undertake “direct action”, often. That means attracting the police. Many Black-led rally organizers from Southeast Portland have criticized direct-action tactics such as damaging police buildings, as they believe it takes Black’s message away. Lives Matter.

But the combination of different marches was very short. About 150 people involved in the action march directly left the area and began to walk west. Some people in the crowd broke down the windows of a hotel and a church, among other buildings.

Brown authorized a joint state and county command post to police the protests, and dozens of police in riot suits arrived and forced people to move. Some people continue to break windows at nearby businesses, including at least two small businesses. Police declared the rally a riot around 7pm, as the group was walking near Southwest 12th Avenue and Alder Street. Some threw gas bottles at the field response officers.

The conflict between state police and protesters ended after a few minutes, but not before causing Portland Streetcars to cancel service for the rest of the night.

Brown’s Joint Command also announced her decision to send the Oregon National Guard. The exact details of their mission are still unclear.

Meanwhile, about 150 people remained at the waterfront rally in downtown near the Skidmore Fountain, where they heard speeches and musical performances by people of color. The demonstration was completely peaceful, and it had a different high-pitched voice from the march that took place simultaneously in a few blocks west.

The police withdrew from the group at about 7:30 pm, but returned 20 minutes later to force the crowd to leave. The police cornered people many blocks east, then north. Officers surrounded dozens of protesters on Southwest Five Avenue, approaching from Alder and Washington streets. The two sides faced off for a few minutes. Protesters shouted at the officers, who eventually forced people to go further west. The police pushed some people and detained at least two others.

“Having criminal activity going on in this crowd affects the safety of others and causes immediate property damage,” an officer said on a loudspeaker.

By 8:30 pm, dozens of protesters were still in the city center, chanting as police watched. After the police pulled back, about 150 people paraded many blocks to the Justice Center, a district-city building that was the center of the protests.

People mostly stood around the parks on Number Three Avenue from the building until 10 p.m., when the crowd began to parade north and west. The police approached after the crowd passed a few blocks, and after a short while standing still, ordered everyone to leave. Demonstrators moved north on Broadway, where some broke the windows of a Starbucks inside Pioneer Court Square.

Police and members of the National Guard returned to the crowd and moved forward, forcing everyone to move west.

Protesters also gathered on Tuesday night, including at an hour-long march through Southeast Portland. The protesters often applauded a list of requests, including Wheeler resigning and cutting $ 50 million for Portland police.

Council is likely to vote on Thursday on $ 18 million in the proposed cuts. But it’s unclear whether Trustees Jo Ann Hardesty and Chloe Eudaly won the required third vote to pass the cuts.

Contributed to this report by Jayati Ramakrishnan, Sean Meagher and Brooke Herbert, will be updated throughout Wednesday.

Register for The Oregonian / OregonLive news and podcast for the latest news and top stories.