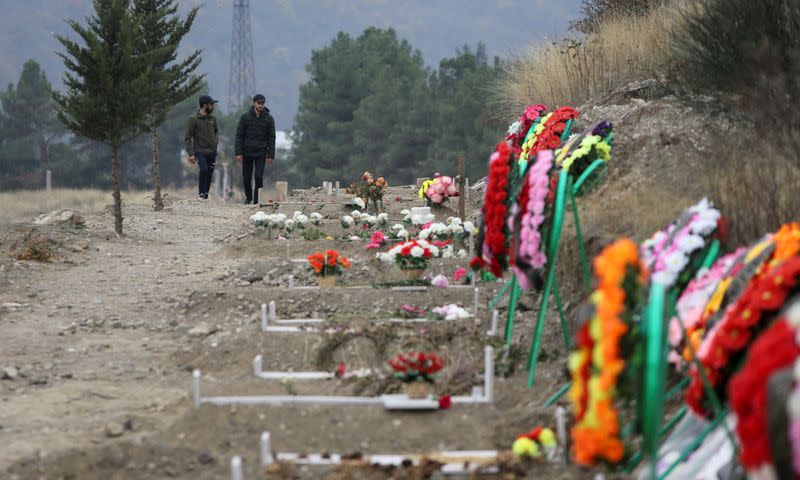 Writing on Twitter, the non-profit Reporters Without Borders has called on the United Nations, the Council of Europe and Azerbaijan to “do everything possible” to allow the evacuation of civilians, including 80 journalists inside and out. country.

At least 1,000 people and possibly many others have been killed since the fighting broke out on September 27 in Nagorno-Karabakh, a mountain region recognized internationally as part of Azerbaijan but population and Armenians control.

A freelance reporter working at Stepanakert, who did not want to be identified, told Reuters by phone that the city was under bombardment before turning off his handheld to avoid the risk of detection.

7;s sirens didn’t stop all day,” said a second reporter, once again by phone from Stepanakert.

A third journalist, from France, said that some reporters left the city via the northern route because the main road to the Armenian capital Yerevan via the strategic zone Lachin was also on fire.

The Armenian-controlled Nagorno-Karabakh Rescue and Emergency Service on Thursday said Stepanakert – known by the Azerbaijanis as Khankendi – was under bombardment by Azeri forces.

It said heavy artillery was also used in the town of Martuni, known by Azerbaijan as Khojavend, while Shushi, or Shusha – the region’s second largest city – was damaged by shelling.

The Azerbaijan Defense Ministry denied these allegations. It said the city of Terter and a nearby village, as well as the villages in the Aghdam region east of the conflict zone, had been bombarded. The Armenian national forces deny this.

The worst skirmish in the South Caucasus in over 25 years has underlined the influence of Turkey, an ally of Azerbaijan, in the region that was once part of the Soviet Union and long dominated by Moscow, the country with defense treaty with Armenia.

The three ceasefire orders were unsuccessful while the attacks by both sides resumed within hours after the warring parties agreed on Friday to avoid targeting civilians.

The Armenian Defense Ministry Nagorno-Karabakh said 1,177 of its troops had been killed since September 27. Azerbaijan did not disclose its military casualties, while Russia estimated 5,000 deaths for both. side.

(Reporting by Nvard Hovhannisyan in Yerevan, Nailia Bagirova in Baku and Margarita Antidze in Tbilisi; Written by Robin Paxton; Editing by Cynthia Osterman)