See the sky: 5 bright planets in view this month 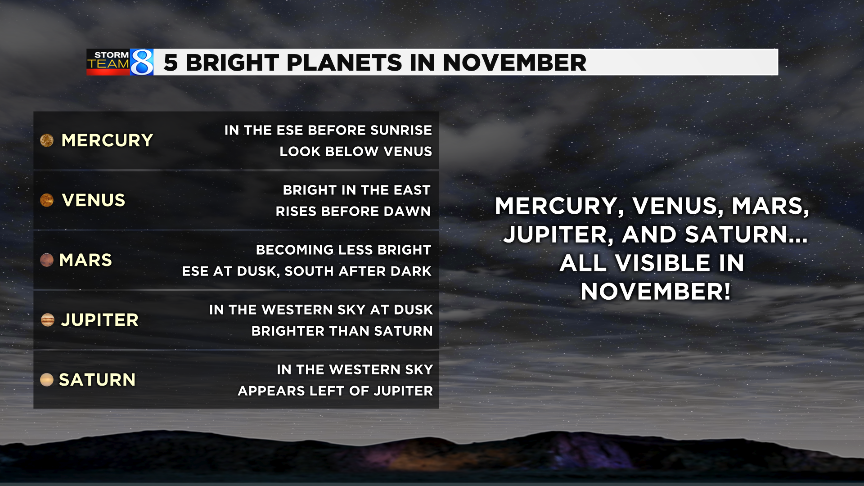 GRAND RAPIDS, Mich. (WOOD) – In October we had a wonderful view of Mars and two full moons. Although November will see only one full moon and the brightness of Mars will begin to fade, this will be a great month for sky hunters.

All five bright planets will be visible this month.

Mercury, Venus, Mars, Jupiter and Saturn are “bright planets”, or planets that we can see without the use of telescopes or binoculars.

Mercury will probably be the hardest to spot, and binoculars will help. First, let’s find Venus. Venus remains the brightest of the planets and the third brightest, behind only the sun and moon. Venus is easily found to the east before and during dawn.

7;ve positioned Venus, look below it toward the horizon. Mercury will stay low east-southeast about an hour before sunrise.

While Venus and Mercury will illuminate the sky in the morning, Mars, Jupiter and Saturn will appear in the evening. Mars is getting less and less bright, but it will still be easier to find in the eastern sky. The best place to see Mars would be south a few hours after sunset.

Jupiter will appear in the west at sunset. Saturn will appear only after a short while and it will be right to the left of Jupiter. Jupiter is the brightest of the two, so once you have identified Jupiter to the west, it will be easy to find Saturn nearby.

On Halloween, we had the Blue Hunter’s Moon. Ed Roblyer took this picture and sent it our way.