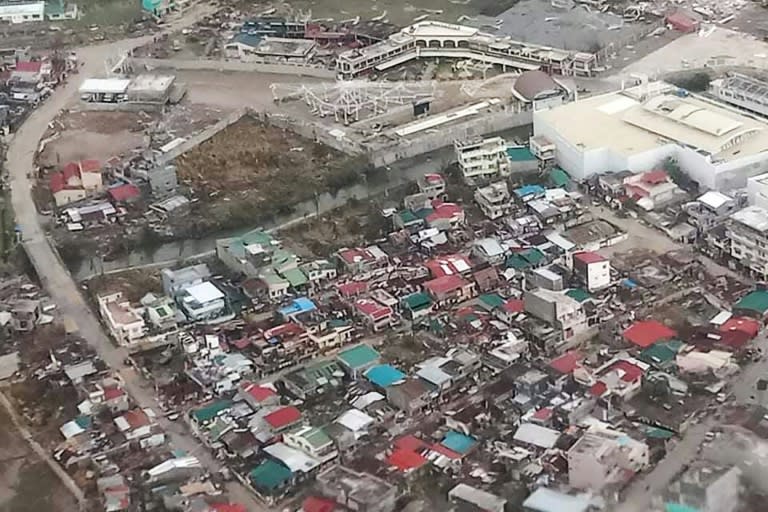 The Red Cross said it could take months to restore power to an island of 260,000 people in the Philippines devastated by the strongest storm this year.

Eight towns on Catanduanes were cut off and about 25,000 homes destroyed by Hurricane Goni, packed with winds of 225 kilometers (140 miles) per hour as it slammed into the Sunday island before sweeping over southern Luzon .

Robert Kaufman, head of the international Federation of Red Cross and Red Crescent, told AFP that there is no telecommunications service on the island and it could take months to restore power.

Kaufman said emergency workers were trying to reach eight towns that had been cut off by the landslide.

“Building after building… if not destroyed, it will be damaged,” Kaufman said.

“Many people have been hanged, now their livelihoods are really upside down and they will need support.”

Strong winds and torrential rain have destroyed at least 25,000 homes on the island and damaged another 45,000, he said, but the number is expected to grow.

Goni comes a week after the Molave ​​storm hit the same area, where resources were stretched out by an outbreak of coronavirus.

At least 19 people were killed by Goni when it crossed the Philippines, including five in Catanduanes and 13 in the nearby Albay province on Luzon, Civil Defense said, down from the previous figure to 20.

The number of people injured was 69 – a majority on Catanduanes.

“The situation is both heartbreaking but also hopeful,” said Kaufman, who also examined the damage in Albay, where the volcanic eruption buried many homes.

“There is a lot of destruction … but one thing I see is an extremely resilient population.”

About 400,000 people were evacuated before the storm, according to Kaufman, “saved their lives”.

Many people are still displaced after about 100,000 houses on Goni’s road are damaged or destroyed

“They have a lot of experience with large-scale hurricanes, catastrophic storms … people know how to leave the area and go to shelter in evacuation centers.”

Many of the people killed were those who left the shelters before the storm passed, he said.