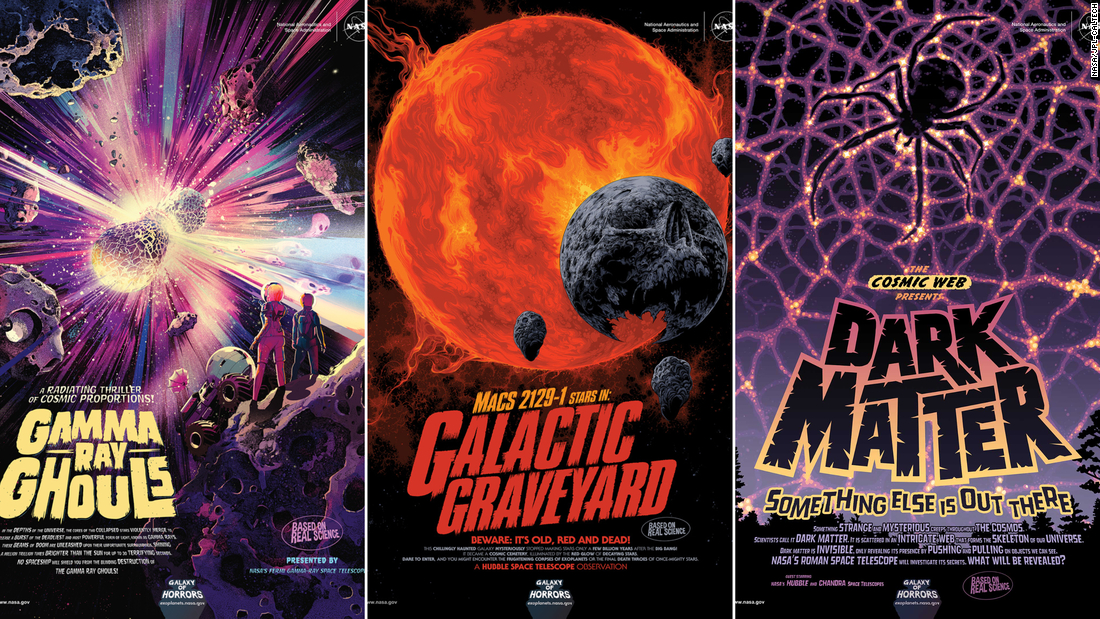 Colorful posters styled like classic horror movie ads highlight some of these cosmic fears in the latest release from NASA’s Alien Discovery Office at The Jet Propulsion Laboratory in Pasadena, California.

The posters are downloaded for free from the NASA website and they are also available in Spanish.
Released on Halloween, the posters shed light on the dangers and mysteries of the universe. The agency has also released a SoundCloud playlist that includes the creepy sounds of space.

Previous posters have highlighted the wonders of our own solar system as well as habitable extrasolar planets, or planets outside of our solar system, where they imagine one day people might be able to visit these remote places.

But the phenomena illustrated in these posters are a little more sinister.

The posters combine imaginative art images with compelling science. Groups of artists and scientists have been collaborating with them since 201

4.
The latest additions to NASA’s Galaxy of Horrors poster collection include elusive dark matter, a deadly gamma-ray explosion, and a “galactic graveyard”.

The galactic cemetery poster showcases an old galaxy, where the birth of stars suddenly stopped just a few billion years after the big bang. Now it is the graveyard of decomposing stars and the only remaining stars red and small, creating a strange red light.

“Dare to step in, and you may encounter the terrifying corpses of alien planets or the final death of once mighty stars,” notes JPL.

The “Gamma Ray Ghouls” poster shows what happens when dead stars collide: a gamma-ray explosion. This is one of the most powerful explosions in the universe.

“These destructive beams are unleashed around their hapless surroundings, a million trillion times brighter than the Sun for up to a terrifying 30 seconds. dazzling specter of gamma rays! ” indicates the text on this poster.

And then dark matter. This invisible gravity provides the structure for the universe, but scientists have no idea what it is made of and have been trying to detect a dark matter “particle” for many years.

“One of the things I really like about these posters is that if you spend some time studying art and then can go to learn a little more about each of these topics, you’ll see the artists think about it. Thinking a lot about Jason Rhodes, an astrophysicist at JPL who advised the project, said they have come up with options to highlight science.

For example, the spider web used in the dark matter poster is an intelligent allusion to the lattice structure of the universe, connecting galaxies together, which we cannot see.

Gamma-ray posters also highlight the danger of collisions between dead stars and the energy they will release.

Judy Racusin, an astrophysicist at NASA’s Goddard Space Flight Center who also consulted on the posters, underlined how rare of gamma-ray explosions – so they weren’t. ability to affect the Earth.

“The poster art is a really fun way to imagine one of these things happening,” Racusin said. “But I don’t want to be those astronauts!”