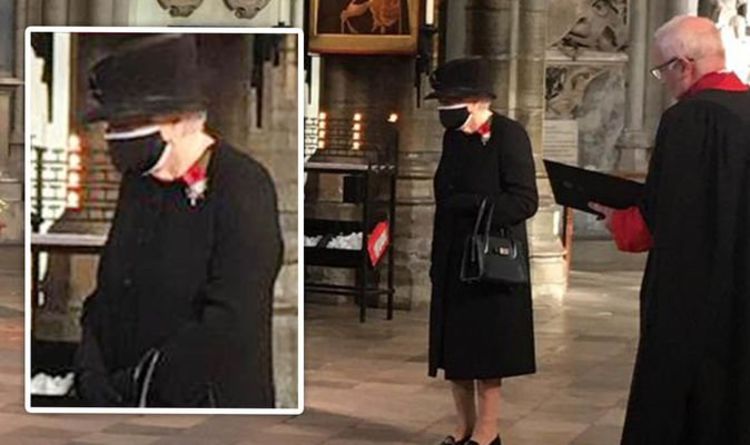 The queen wears a black shirt covering her face with white trim during a visit to the Tomb of the Unknown Warrior at Westminster Abbey, the newly released photos show. The simple mask matches the king’s gloomy black outfit and is said to have been created by the Queen’s costume expert and private advisor Angela Kelly.

This is the first time the Queen has been seen wearing a face veil since the beginning of the pandemic.

The king sparked a backlash last month after stepping out of Windsor Castle for her first royal visit since March, in which she was not wearing a mask.

Along with Prince William, she visited Porton Down to meet staff at the Defense Science and Technology Laboratory (Dstl) and officially opened the new Center for Energy Analysis.

GMB host, Piers Morgan wrote on Twitter: “Why not wear a mask or away from society?

“Sorry, but this was not a smart move for the Royal Family as the virus raged and the country fell into another shutdown.”

Journalist Darren McCaffrey tweeted: “The Queen, a future King and a policeman – but no mask in sight.

“Should they be an example and wear one?”

Martin McHugh replied, “One hundred percent of them should. It doesn’t matter who your age is.”

Colette Jones said: “It’s disappointing about their behavior. They are supposed to be role models.”

The entry in the registry, dated 4 November, reads: “This morning, the Queen commemorated the 100th Anniversary of the Tomb of the Unknown Warrior at Westminster Abbey, London SW1, and was welcomed by the Dean of Westminster. at Great West Door (The Very Reverend Dr David Hoyle). “

The Unknown Warrior was buried at the Monastery on November 11, 1920 in the presence of the Queen’s grandfather – King George V.

The king is expected to return to central London on Sunday to mark, along with other senior royals, Sunday tribute.

The ceremony will be held socially rigorous and closed to the general public, with people invited to watch at home to protect themselves and veterans from coronavirus.