How to turn ordinary bricks into super capacitors 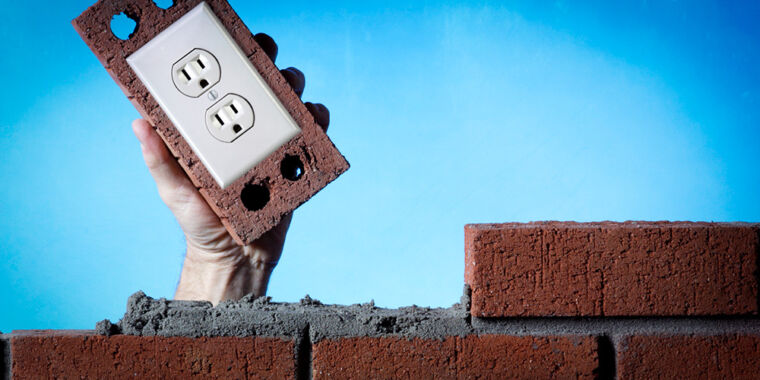 Usually, the term “power brick” refers to the AC adapter of something like a laptop. But what if the term literally relates to an actual brick?

A research team led by Hongmin Wang at the University of Washington has started making a genuine electric brick. More specifically, they wanted to see if they could use the vapor coating technique to turn ordinary red bricks into part of the supercapacitor. That really isn̵

7;t rather It sounds strange because the red color of bricks is an iron mineral, and iron is a common ingredient in some battery chemistry plants. Bricks are also typically porous, which means there is plenty of surface area where a thin coating can interact with that iron.

This process (which they developed previously) involves heating the brick in a casing with hydrochloric acid and an organic compound that can be shortened to “EDOT”. The two liquids evaporate and condense on the surface of the brick. The acid dissolves some iron minerals, releasing iron atoms that help organic molecules to link together to form polymer chains (converted to “PEDOT”) that cover the surface. The polymer produces tiny, tangled fibers that form a continuous and conductive layer on each side of the brick, which remains. (However, this has the effect of making the brick black.)

The team tested performance in a number of configurations, including one with a solid gel electrolyte sandwiched between mortar-like bricks. The full epoxy coating makes it waterproof (as in, “water active”) and also prevents the electrolyte from ever drying out. Obviously it was possible to perform multiple combinations of parallel and series bricks, although for testing, they were in series with three brick units of tiny road cubes. After a full charge for 15 seconds, this configuration powers the LED for about 11 minutes before the voltage drops from the original 2.7 volts to below the LED’s required 2.5 volts.

Even with full-sized bricks, the total stored energy is… much less. They estimate that a wall made of these bricks can hold approximately 1.6 watt-hours per square meter of wall area. That means a three meter x six meter (10 feet x 20 feet) wall can hold about 20 watt-hours of electricity. Hence, the researchers’ ad for this idea is less dramatic than “turning your house into a battery!”

“Our supercapacitor technology adds value to a ‘water-cheap’ building material and demonstrates a scalable process that stores energy to power appliances. micro-embedded in architectural applications that use bricks. “These powered walls probably won’t challenge Tesla’s Powerwall (13,5 weightwatt-hours in less than one square meter on the wall) any time soon. But it’s an innovative concept – one super capacitor brick is sure to be more than just another brick on the wall.