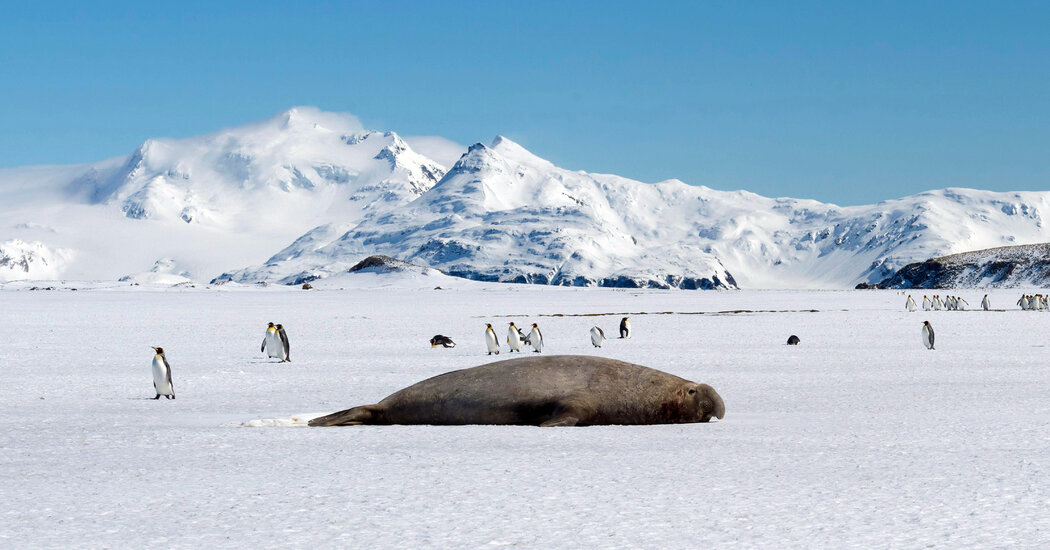 At the bottom of the planet is the Southern Ocean, its water cold, swirling and surrounded by ice for months of the year.

The edge of the ice melts in the summer and re-forms in winter, is known as the marginal glacial zone and is difficult to study. Large icebreakers, often used for regional research, cannot consistently observe small-scale ocean activity. And the sea glider – small, relatively inexpensive gear that sinks in water and ascends periodically – doesn’t work under the ice. “It’s a blind spot of knowledge in our climate system,” said Sebastiaan Swart, a marine biologist at the University of Gothenburg in Sweden.

What is known about the marginal ice zone is that it is an important system of storing carbon and heat emitted by humans. The global oceans generally store more than 90% of the Earth’s excess heat, and the Southern Ocean is the portal through which most of this heat is transferred from the atmosphere. This makes ignorance of the region particularly troubling.

But Dr. Swart and Louise Biddle, a researcher also in Gothenburg, found a way to address this methodological barrier in an article published in May. To do so, they turned to unique organic tools that can consistently gather information from under the ice: southern elephant seals.

Seals in the Southern Ocean have been monitored for decades. Small sensors and trackers attached to their bodies and the top of their heads, like small caps, transmit information from dives – depth, lateral distance, water temperature, salinity – are open access database. Southern elephant seals are typically a master diver, and spend about 90% of their time searching for fish and squid underwater, only floating for a few minutes between expeditions for steam before sinking into the cliff. squid.

Due to the frequency of these dives, seal data, like roller coaster data at sea, can reveal eddy currents and small currents in the water. These currents are the result of many of the same forces, including wind and thermal slopes, which produce large currents like the Gulf Flow, but are much smaller and are called sub-grade currents. Some are just the length of a football field and last no more than a day.

Though tiny, currents at the sub-level have a direct effect on what Dr. Swart calls the “window between the atmosphere and the entire ocean”.

This window is called a composite layer, a portion of surface water has depth and stratification that determines how much heat and carbon is absorbed by the ocean; The deeper and better the composite layer is, the wider the windows open and the easier it is for the ocean to absorb heat and carbon from the atmosphere. Sub-scaling streams change this depth and stratification, and thus, the aperture of the window.

Without the technology to analyze under the ice cover, no one knows what kind of sub-grade currents are occurring in the marginal glacial zone. The scientists guessed that the ice would reduce the strength of eddy currents, “but we don’t even have observations to indicate whether they are there,” said Dr. Biddle.

Then, two researchers realized “that the seals have been under the sea ice for many years and years,” said Dr. Swart. “And because they do that, they’re collecting the right kinds of observations for us to look at the ocean above under the sea ice.” Open access seal datasets are capable of illustrating what kind of sub-grade flows occur under the ice and whether they do.

So the two turned to the Southern elephant seal, which they found, challenging collaborators. Many of the dives and respective data were gathered outside the study area. “You can’t tell them where to go,” said Dr. Biddle with a laugh. “That is the biggest problem. They follow the food “.

But there is enough information to provide a first glimpse of eddy currents under the Southern Ocean’s ice cover. And what’s surprising is that Dr. Biddle and Dr. Swart found that currents at the sub-level are nearly as active under the ice as when they were out in the ocean, and they are strongest in mid-winter, when thickest ice.

In short, seals show that water in the Southern Ocean moves more under the ice, and especially under the thick ice, than many scientists predicted. Perhaps this has to do with the variable concentration of what Dr. Biddle calls “pancake ice,” which causes a change of heat in the mixture layer. Perhaps it has something to do with wind and weather. Either way, it’s an important finding.

“If these subregions change in the future, they will actually change the amount of heat and carbon stored in the atmosphere or in the ocean,” said Dr. Swart. “And so they are really, really important, cumulative, for the habitable planet.