One study found that the risk of premature death – including cancer or heart disease – decreased by about a quarter in people who ate chili peppers.

Researchers from the US have found that the anti-inflammatory properties of capsaicin – the compound that gives chili peppers a fiery flavor – may have many health benefits.

These include fighting tumors and inflammation and helping the body to control blood sugar levels.

The ‘quite remarkable’ finding came after the team analyzed the health and dietary profiles of more than 570,000 people globally.

However, the researchers note that further studies are needed to determine which types of peppers are protective and how often people should consume them.

One study found that the risk of premature death – including cancer or heart disease – decreased by about a quarter in people who ate chili peppers.

Lockdown could give Britons the chance to pack potentially life-saving chili into their meals, heart experts say.

“Many of us are cooking more than usual at the moment,” says British Heart Foundation dietitian Victoria Taylor.

‘Experimenting with herbs and spices can be a great way to liven up your home-cooked meals and add variety, in a healthy and nutritious way.’

‘Fresh and dried chili peppers, black pepper or lemon juice are all healthier ways to add flavor to your meals, which may help us cut back on salt. “

‘However, watch out for ready-made chili sauces as well as the mix of spices and rubs, as they are often high in salt.’

‘Use the nutritional information on packaging to help you find low-salt options as too much salt is linked to high blood pressure, a risk factor for heart and circulatory diseases.’

‘If you want to try cooking some healthy recipes this winter, the BHF website has some great suggestions.’

Study leader and cardiologist Bo Xu of Cleveland Clinic in Ohio said: ‘Regular consumption of chili peppers is associated with a reduced overall risk of all causes, cardiovascular disease and mortality. due to cancer.

In their study, researchers compiled data from four previous health studies conducted across China, Iran, Italy and the US.

The team believes that capsaicin – an antioxidant – may help fight inflammation and tumors as well as help control blood sugar levels, thus protecting against both diabetes and obesity.

“I think the findings are really remarkable,” said nutritionist Penny Kris-Etherton of the American Heart Association and Pennsylvania State University.

“There are links to many different diseases and endpoints,” she added.

The authors found benefits of chili pepper consumption on all causes of death, cardiovascular mortality, and cancer mortality. ”

Hence, the fiery compound can be used as the foundation of an ‘anti-obesity’ tablet.

“The exact reasons and mechanisms that could explain our findings are not yet known,” said Dr. Xu.

Therefore, it cannot be concluded that eating a lot of chili peppers can prolong life and decrease dnausea, especially due to cardiovascular factors or cancer. ”

The studies the team reviewed included only limited health data on their subjects, noted Dr. Xu, and may include other factors that influence results.

Furthermore, the amount of chili pepper consumed – along with the specific types eaten – varied widely among different study participants, making it difficult to accurately determine the optimal diet of this fruit. 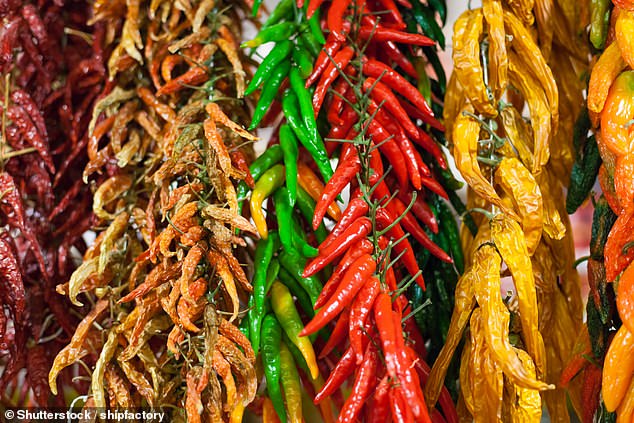 Researchers from the United States have found that the anti-inflammatory properties of capsaicin – the compound that gives chili peppers (pictured) a fiery flavor – can provide a variety of health benefits.

Chili peppers have developed capsaicin – the substance that causes pain responses – to protect them from being eaten by mammals, including the humans we eat.

Meanwhile, birds – which are needed to help disperse the seeds – lack receptors in the mouth to sense the burning of the fruit, so they don’t feel the same fiery response.

A 2017 study of more than 16,000 Americans followed for nearly two decades found that those who ate a lot of chili peppers had a 13% lower risk of premature death.

Last year, a study of 22,000 Italians found that those who ate chili peppers every other day had a 23% lower risk of dying from a stroke or heart attack, 61 and 40, respectively. %. 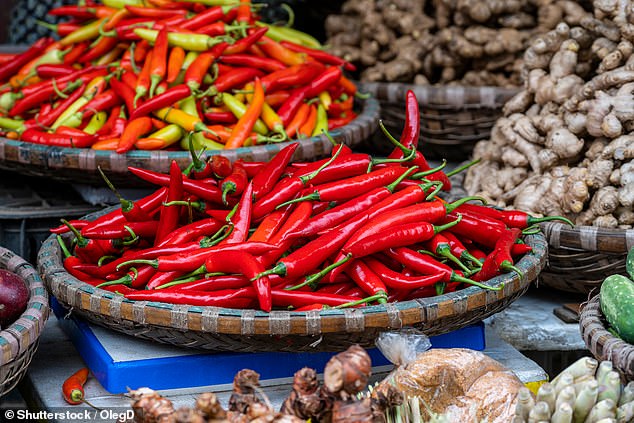 The ‘quite remarkable’ finding came after the team analyzed the health and dietary profiles of more than 570,000 people globally. However, the researchers note that more in-depth studies will be needed to determine which varieties are protective.

According to Cancer Research UK, adopting a healthier diet can help prevent about one in twenty cases of cancer.

The foundation recommends a diet high in fruits and vegetables, whole grains, fresh chicken, fish and beans and low in processed red meat, fatty foods and sugars, and carbonated beverages. and alcohol.

Chili is a staple fruit of cuisines around the world – including Indian, Chinese, Thai, Mexican and Italian – and is eaten daily by a quarter of the world’s population.

The researchers presented their preliminary findings to a virtual meeting of the American Heart Association.

There are 23 known types of capsaicinoids and all of them are thought to originate from the intestine of the pepper.

It’s not really a warm sensation on the tongue and in the mouth, but a response to pain.

The spiciness of pepper is determined by genes that regulate capsaicinoid production, and less spicy peppers have mutations that slow this process.

These molecules have known nutritional and antibiotic properties and are used in pain relievers and pepper spray.