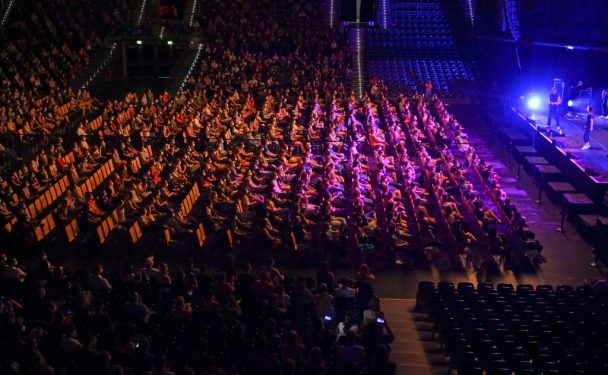 We all hope for the good news today, and here are some of the things we should not expect: Epidemic house concerts may be safer than people realize. Researchers in Germany recently held an indoor concert as a test to study its effect on COVID-19 release. As The New York Times reports, news as well. As long as the right precautions are taken, the researchers say that the spread of COVID is “low to very low” at an event like this.

In August, German scientists invited pop singer Tim Bendzko to a performance at Leipzig’s Quarterback Immobilien Gymnasium. Bendzko played with about 1,400 masked attendees on Saturday morning, with a team from Martin Luther Halle-Wittenberg University studying the various effects. The attendees were all volunteers and scientists experimented with different scenarios for them for about 1

0 hours. Mist machines are used to study airflow and fluorescent dyed hand sanitizers to observe exposure from people in crowds. They tried different types of crowd arrangements – out of society, partly away, not far at all. They found encouraging results: “There is no reason not to hold such a concert … The risk of infection is very low.”

There are many caveats here. German scientists announced their findings last week, but the results have yet to be reviewed. Also, the safety of indoor performances seems to depend on things like good ventilation, which is not something American clubs are famous for. Strict hygiene rules and limited capacity are also important. Also, as far as I can tell, the study doesn’t have anything to say about the possible effects of mass binge drinking. Festival organizers are still following up on this research, however, and it seems to be a reason for cautious optimism.