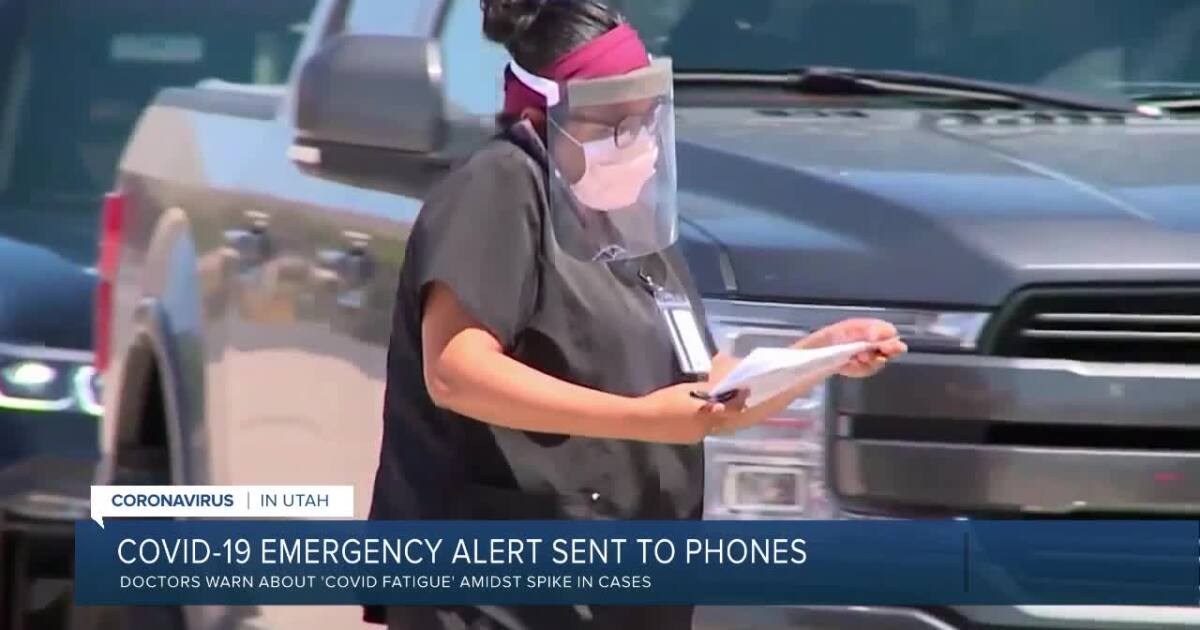 SALT CITY LAKE – On the weekend of Halloween, nearly everyone in the State of Utah suddenly received an alarming loud warning on their mobile phones around 2 p.m.

It warns of an increasingly serious situation with COVID-19 in the state. Public Safety Bureau points out that anywhere from 1.5 million to 3 million cell phones light up with messages.

“When I see it, it’s great that they’re taking precautions across the state, to remind people,” said West Valley City resident Leveti Tukumoeatu. “But, we should all now know what we should do.”

That’s because the warning comes after a week with the same repeated messages from the head of state. Not to mention it was a message that had been repeated for several months.

Tukumoeatu talked about feeling tired of COVID-19 during a prolonged pandemic.

“That is the way [more] overwhelming than necessary, the way I perceive it, “he said.

“Everyone is tired of it, everyone wants everything back to normal,” she said of what others are feeling. “But this needs to be the new normal, unfortunately.”

Psychiatrist Travis Mickelson points out that hearing the same message over and over again – in months that seem like months go by – can make your mind think.

Dr. Mickelson, Medical Director of Mental Health Integration at Intermountain Healthcare, explains that some of his clients have suffered the emotional and physical effects of pandemic stress.

“When we are faced with the same stressors day in and day out, many of us have times where we feel fatigue levels as if we can’t manage or cope. more, “he said.

One way to deal with that, probably would be to get rid of any noise.

“Avoiding is a very common coping strategy people have,” he said.

But instead of dismissing the emergency warning and continuing, Dr. Mickelson has come up with three suggestions for rejuvenating a person’s mental state in times of increasing morbidity and mortality, in while still paying attention to the repeated messages and warnings.

First, he suggests finding a coping strategy and making sure you’re making use of it.

Dr. Mickelson mentioned that he has seen many success stories over the past few months, as individuals and families enter new activities. He says that includes music, art, more time outdoors and limited screen time.

Second: Be active. Dr. Mickelson suggests that by the end of the day, identify at least three positive things that have gone well or made someone’s life better.

He said that during times of stress, the human brain is wired to focus more on the negative, stressful things in the environment. People tend to forget what’s going well and they need to proactively remind themselves of the positives, he said.

“There is a lot of research showing that people who focus on positive events, creating positive emotions, become more resilient and better able to manage stress,” he said.

And finally, Dr. Mickelson said get in touch with professional help if you need it.

He said if you or someone you know are showing signs of not managing stress well and your signs and symptoms don’t go away, it’s time to reach out.

Dr. Mickelson mentioned that Intermountain Healthcare has their own Emotional Health Relief Hotline, available seven days a week from 10 a.m. to 10 p.m. That number is 833-442-2211.

Tukumoeatu said he definitely didn’t expect COVID-19 to last that long and it affects everyone. He talked about how he got tired of COVID-19 for months.

“It’s getting worse and worse, and it’s causing all kinds of problems – our health, people around the area are going crazy over it and protesting, and causing problems everywhere. where “he said.

Wade said she never thought it would go downhill so quickly.

They both talked about diligently obeying mask duties and respected alerts like Friday’s DPS messages.

“That’s terrible, but we have to do what we have to do until the vaccine becomes available and we can reduce the incidence,” Wade said, adding, “but, let’s save people’s lives. “.