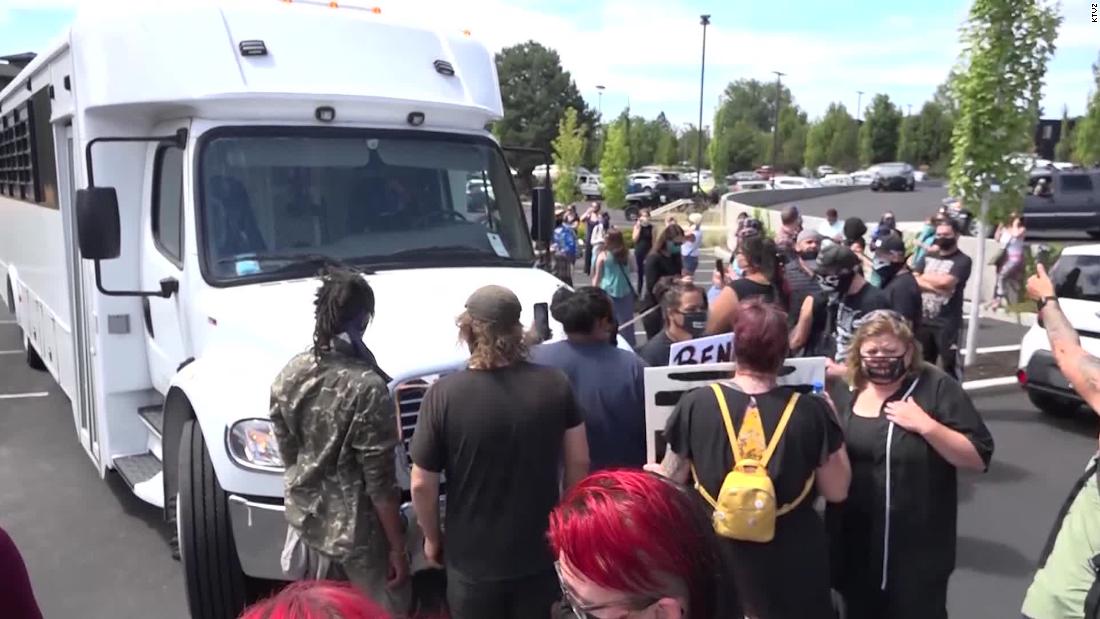 Federal agents appear to have used aerosols to force protesters to move out of unmarked buses following a nearly 12-hour congestion in Bend City, KTVZ reported.

Federal agents have since left the scene, near an office building, and the crowd has dissolved peacefully, Bend police said in a tweet earlier on Thursday. Details about where the detainees and agents have gone are not immediately available.

The arrest that led to a standoff was that two undocumented people with “history of violent crimes”, the Homeland Security Department said without disclosing more details about them.

“While ICE respects the right of people to speak peacefully, that does not include illegally interfering with their federal law enforcement mandate,”

; Cuccinelli said. in a statement. “ICE will take all necessary measures to ensure the safety of officers and detainees, and will aggressively pursue protection against anyone who harms them.”

When federal agents arrived at the scene on Wednesday night, someone said through a round of applause that one of the people on the bus was having a life-threatening medical emergency and therefore needed must be taken away, KTVZ reported.

Videos from KTVZ showed agents, holding batons and wearing tactical gear including helmets and visors, walking in the parking lot as members of the crowd chased, shouting and mocking.

“Feds home!” shouted someone, according to the branch.

What has begun to standstill

The standoff began on Wednesday afternoon when a man, apparently knowing that ICE had detained someone or some people, stepped in front of one of the buses in the Bend parking lot, refusing to move and started streaming live on Facebook, KTVZ reported.

That eventually drew a crowd, gathered in part to protest the arrest. Within hours, some in the crowd held up signs with messages including, “Stop dividing family”, “Not good” and “Where is love?” KTVZ reported.

Local police tweeted that they came “to allow free speech” and made sure the protest was safe, but constantly sought to block their actions with ICE prisons. “We’re not there in a supporting role with ICE,” they tweeted.
Bend Police Chief Mike Krantz said his department knew on Tuesday and Wednesday “that the ICE agents were in Bend to investigate, however we were not informed of their blueprints.”

“The Bend Police are not involved in ICE activities,” said Krantz. “We do not use funds or personnel or equipment to enforce federal immigration law or to detain people based on immigration status. This is consistent with Oregon law and departmental policies.”

Before the deadlock ended, the Deschutes County attorney, where Bend is located, tweeted that he was at the scene and “impressed by our community’s passion and empathy.”

The county attorney, John Hummel, added that both he, the governor, the mayor and the sheriff “tried to broker a solution with DHS, but to no avail.”

ICE regional spokesperson Tanya Roman said that “due to law enforcement sensitivities and the safety of officers, ICE does not discuss planned operations.”

“Despite the serious challenges, ICE remains committed to our public safety mission and ICE officers will continue to fulfill their sworn duty to find alien criminals. Dangerous crystals and other immigration offenders, “her statement to KTVZ wrote. “ICE seeks blunt cooperation with state and local law enforcement and has never asked them to enforce federal immigration law.”

CNN’s Jason Hanna and Christina Walker contributed to this report.