Coronavirus in Oregon: 7 deaths, 424 new cases when the state daily average is close to 400 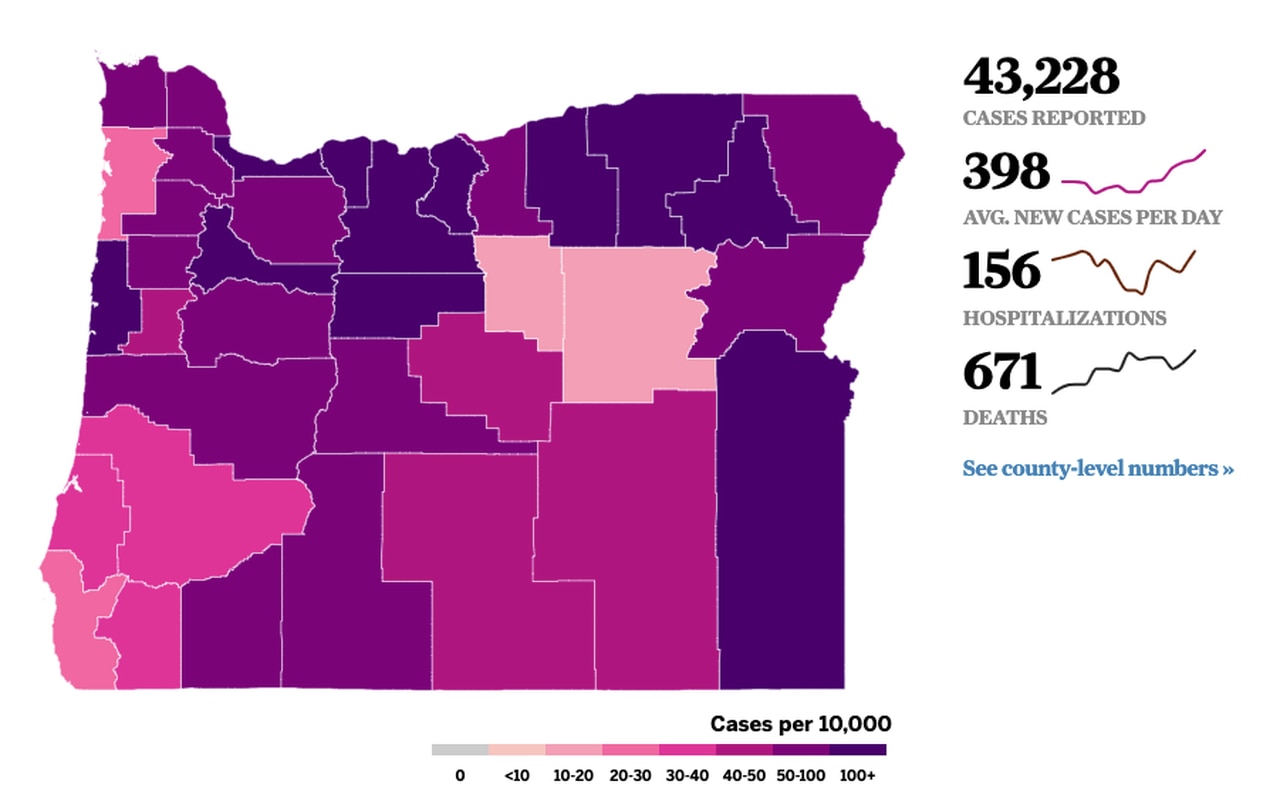 This is up 10% from the peak two weeks ago and 15% higher than the increase in the summer.

The latest spike came on Wednesday when the Oregon Health Authority reported 424 new cases and an additional seven deaths. In another worrying sign, the increased number of cases could not be attributed solely to test volume: nearly one in 1

0 tests reported since Tuesday had a positive result, marking the second highest rate. Oregon since the end of March.

Oregon has seen far fewer illnesses and deaths per capita than most other states in the country. But the average daily Oregon case count now where states like Idaho and Montana were three to four weeks ago – and those states have seen a doubling since then.

Governor Kate Brown and state health officials find themselves in a difficult position trying to encourage Oregonians to take basic precautions to stop the spread even when recommendations That doesn’t seem to go unnoticed. At the same time, officials preaching new personal protective measures, they have taken steps over the past week to reopen bowling alleyways in the Portland metro area and long-term care facilities across the country. states for indoor visits.

“With the number of cases increasing, I have instructed the Department of Human Services to proceed with caution,” Brown said in a statement Wednesday announcing the new policy to care facilities. “However, I hope that now families can begin safely visiting loved ones they haven’t been able to see for months.”

According to The New York Times, national cases have increased by almost 40% over the past two weeks, suggesting that even Oregon’s most recent increase has been muted. But the model released by the state two weeks ago shows that Oregon will see an increase, possibly reaching 570 identified cases per day by November 5.

Oregon has approached that number of cases only once so far. The state’s latest model is expected to release on Friday.

New deaths: Oregon’s 665 death involving coronavirus was a 55-year-old man in Jefferson County with an underlying health condition. He got a positive result on July 18 and died September 13 at St. Medical Center. Charles in Madras.

666 death was an 81 year old man from Multnomah County with underlying medical conditions. He was positive on October 11 and died on October 24 at Adventist Health Portland.

Oregon’s 667 death was a 68-year-old woman in Multnomah County with an underlying health condition. She got a positive result on August 14 and passed away on October 24 at Kaiser Westside Medical Center.

The 668 death case was a 58-year-old woman from Coos County with underlying medical conditions. She got a positive result on October 15 and passed away on October 22 at her residence.

Oregon’s 669 death was a 78-year-old man in Jackson County with an underlying health condition. He was positive on October 13 and died on October 26 at Asante Rogue Regional Medical Center.

The 670th death is a 62-year-old man in Clackamas County with no underlying medical condition. He tested positive on September 18 and died on October 24 at Legacy Good Samaritan Medical Center.

Oregon’s 671th death is an 85-year-old woman in Washington County who tested positive on October 16 and died on October 23 at Kaiser Westside Medical Center. State officials are determining if she has an underlying health condition.

Who is in the hospital: On Wednesday, the state reported 156 Oregonians with confirmed coronaviruses were in hospital, up 9 from Tuesday. Oregon is still below its capabilities, with hundreds of hospital beds and ventilators available.

Since it started: Oregon reported 43,228 confirmed or assumed infections and 671 deaths, among the lowest in the nation. So far, 838,854 Oregonians have been tested.