Canzano: The Oregon Ducks opener was an existential win and moving forward against Stanford 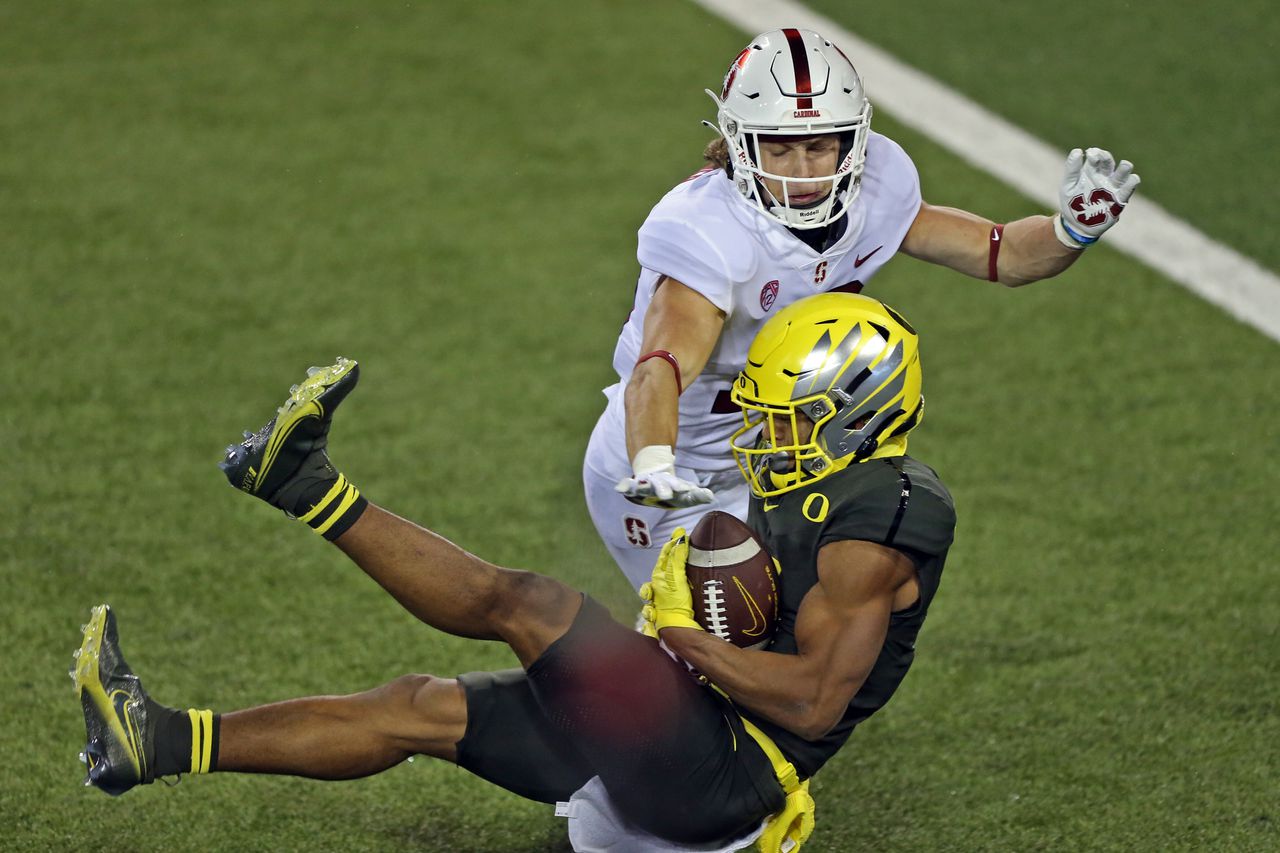 EUGENE – The sky opens and it drizzles on Saturday night. It was inevitable, but my eyes were immediately directed to the vulnerable rows of cardboard-cut fans at Autzen Stadium.

The cuts are held. I hope Mario Cristobal’s soccer season will be the same.

2 games is a quest for survival and progression. Turn on the mask in the press box. Not allowed to use the Duck mascot. There was no marching band, nor was it. There is no cheerleader. Empty visiting sports director box. The same stadium seats, except for those cutouts, and a few security guards wearing blue wind vests leaning against Autzen’s top rails, six feet apart, watched.

Speaker Don Essig was supposed to be sarcastic, “Stadium – for two people?”

Oregon and Stanford matched and played a game. The four teams in the conference were not so lucky. One-third of Pac-12 were stuck with a “out of competition” status due to positive COVID-19 tests and contact tracking requests. Whatever I’m going to write about football here should first be framed by the notion that playing on the pitch itself produces a great weekly achievement.

I spoke to UO President Michael Schill for a few minutes after the break. He wears a mask and gloves. His glasses have been blurred. It’s 2020. Without a doubt, everyone’s doing the best they can.

Duck Grade: I think satisfactory. Not good. Not really terrible. Oregon looked so mediocre before a struggling Stanford march that missed four goals on the field and gave the Ducks a 100-meter penalty. Cardinal is also playing with short speech.

However, “35-14” is the love language of the College Football Championship selection committee. Form scores will be crucial this season and in theory the win will go down in the form of a three-point knockout. Also, “1-0” puts you immediately on top of the conference rankings. So I won’t blame anyone in green for watching the same odd match I saw and walking away in suspense.

I have a bunch of questions.

It’s easy to get caught up in lowering standards of excellence these days. But that’s not what Oregon should do here if it really hopes to win the conference and be considered for the playoffs.

Cristobal’s team had to play better. Wing-back Tyler Shough (17 out of 26 for 227 yards) needs to be more stable. The full-backs need to be more active and keep the ball. The entire strike line, first starting together, attacked nearly 500 yards. Great start. But the UO line didn’t set foot on the ground the way it did a year ago with Outland Trophy winner Penei Sewell anchored it.

“I know our team and our team, they are not happy unless they dominate completely and completely,” said Cristobal.

Read: No one is happy.

Oregon serve inconsistently on both sides. Offenders want to pay a deposit. The defense wants to knock everyone out. It did a bit of that. Anyone who has watched can see the brief, dominant physical activity that Oregon wants to be at the end of the season. But for now, Oregon is just dominating.

Next week for Ducks, it will take place on the road at Washington State, the backdrop of the 34-20 defeat two seasons ago. I remember Cristobal standing in the on-campus practice room in Pullman, Wash. After that defeat, search for words. Oregon has not won the Pullman since 2014. It is duty ahead.

Duck needs to make sweeping and impressive improvements in weeks 1 – 2 that champions usually do. They also need to stay healthy and follow procedures. Then, as tough SEC fans say, Oregon needs to show up, “win and pick $% $.”

These are different times. I say that a lot lately. Of course, there is a lot to be encouraged on on Saturday. Duck appears. They kicked off. There are glimpses of what could be, or might be. And Oregon left me wondering if this season’s growth should be adjusted.

But a few other so-called national playoff contenders didn’t consider it on Saturday either.

During the break, Schill asked what I thought of the stadium’s new $ 12 million video board and audio system. It was the biggest, beautiful thing of all college football. Fans will love it when they see it one day. It is so easy on the eyes and planted in perfect sight that it will challenge everyone in the stadium to keep their eyes on the field.

When president-elect Joe Biden and vice-president-elect Kamala Harris delivered a speech Saturday night, ABC cut it off to go live. The Stanford-Oregon game was pushed to ESPNews. Schill stood and watched Biden read his speech from the television in his box on the third floor of the Autzen Stadium. But the school principal stood, turned to that new video board, simultaneously watching the soccer match and Biden. He’s just like any ordinary American alone in his 58,000-seat living room, two TVs, seeing it all.

“No matter where I stand in the box,” said Schill, “I can still see that video board.”

The beauty of Oregon’s victory really came after the game started. Cristobal doesn’t seem nervous. Players talked about improvement. The support staff at Eugene looked relieved as they had just successfully concluded an event we had all been predicting for months.

It also gives me hope.

The Ducks won a soccer match for the first time since January. On paper, it would appear to be a remarkable performance. The atmosphere in the stadium was weird and empty. It wouldn’t be the same without the fans. That way, we all know there is work to be done.

After the match, both teams jogged towards the center of the field to shake hands, take pictures and hug old friends. I think old habits are hard to die. However, the players were stopped by panicking aides from both shows, who jumped in between the two fused blocks, stretching their arms and shooting the players towards their dressing rooms.

Please text each other.

Catch up with another time.